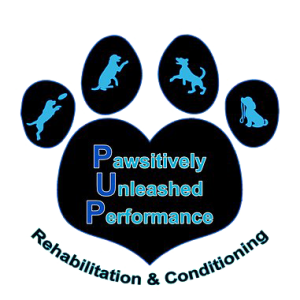 Our specialty is helping SENIOR DOGS improve their INDEPENDENCE in their daily lives so they can enjoy their GOLDEN YEARS easier and more comfortably.

PUP Rehabilitation and Conditioning provides canine therapy and conditioning services by a licensed physical therapist certified in canine rehabilitation. We can improve your pet's quality of life by treating movement impairments and disabilities due to injury, disease, a surgical procedure, neurological problems, arthritis, obesity, or age-related changes. We also offer conditioning programs for the well-pet or athlete to maximize performance, help with weight management, and improve fitness levels. We do fitting/recommending of adaptive equipment for dogs in need of assistance and also do puppy evaluations to get the young ones started on the right paw! 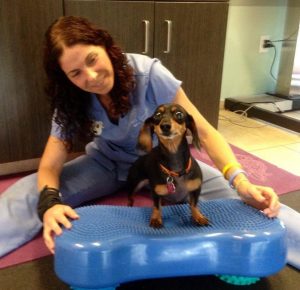 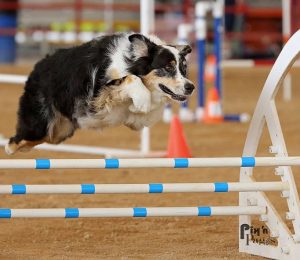 Fisher is an agility dog.  At the age of 9.5 he started acting old and had quite a bit of difficulty in getting over spread jumps. I attended a hands-on seminar with Shari for performance dogs.  Wow, what an eye opener.  Fisher had quite a bit of difficulty doing some of the exercises.  He couldn't walk backwards over bars on the floor.  So we made an appointment to visit Shari at her office.

After that first session I was amazed at how much more youthful and full of energy Fisher was.  His iliopsosas was tight. His pelvis was rotated. His vertebrae were rotated. You could actually see it in his eyes once all the DISCOMFORT was relieved!

We do our conditioning exercises 2-4 times a week and Shari and I are both impressed by his improvement over the past 6 months. We have regular checkups with Shari to make sure we catch anything before it builds up. Fisher now can step backwards over those bars on the floor.  He is stronger and faster than he has been in a very long time!

I am so thankful for finding Shari and for all her help and support over the past few months!Our latest jumpers run had Fisher 15 seconds,under course time!  He smiles and is still having a blast and is so energetic in everything he does!

I can not thank Shari enough!! 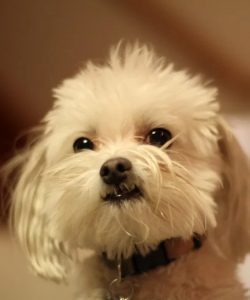 After Zaza, our 4 pound delicious Maltese, who was 9 years old at the time, came through her operation on her spine at the Animal Medical Hospital in New York, she began therapy there. When it was time for us to go back to our winter home in Florida, we told them there that we would not go back to Florida unless they could find a physical therapist in Florida, near our residence, for Zaza. After researching, they discovered that Shari Sprague was close to our home in Naples and what was really propitious was that she trained the therapist at the Animal Medical Hospital. Well they were so terrific that we felt if Shari was as good as they were Zaza was in good hands.

Well we are her to say that Shari was not as good, she was so much better. She was their teacher after all and her knowledge, her compassion, her patience and her love for what she was doing translated into Zaza, who could not take more than a few steps when she got to Shari, to walking the equivalent of a New York City block.

Shari gave us back our little girl and for that we will be eternally grateful. 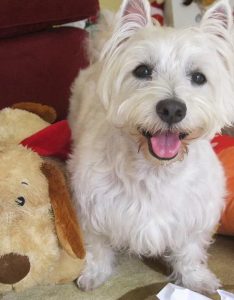 I am writing this on behalf of my little Westie wonder girl Courtney Jeanne... if she could type she would no doubt write it herself!

I cannot recommend Shari Sprague highly enough as she has been working wonders with Courtney Jeanne, my 9-year-old West Highland White Terrier, over the last several weeks. Shari's stellar knowledge and expertise of physical therapy is surpassed only by her obvious love for what she does. It is rare to see a person so perfectly suited to their chosen profession!

I was very fortunate to be referred to Shari by my vet after Courtney Jeanne had injured her left rear leg. My girl was diagnosed with a torn cruciate ligament and put on strict rest with the possibility of having knee surgery should she not recover. The mere mention of surgery was enough to make this overprotective pet parent very concerned, so giving physical therapy a try was a must!

Shari developed an instant rapport with Courtney Jeanne, which is no minor accomplishment as Courtney Jeanne is the very definition of Mommy's girl! Seeing her take to Shari made pursuing PT so much easier because I had absolutely no qualms leaving Courtney Jeanne in her care. Shari took the time to evaluate and diagnose Courtney Jeanne's situation and developed a rehabilitation plan just for her. The care that she takes in treating her patients is truly remarkable and very reassuring. And the results that she gets are indicative of her both her experience and unique ability to understand her patient's needs. I think this is truly amazing since those entrusted to her care cannot just tell her what is bothering them and yet somehow Shari gets to exactly what is causing the problem!

After each session with Shari Courtney Jeanne literally prances out to the car. You can absolutely see the positive results of the day's physical therapy and the progress that is being made. This is how I know that Shari will be the one to get Courtney Jeanne back to being queen of the dog park aka chasing balls at thoroughbred speed with her sister trying to catch her! And this is why I will not trust Courtney Jeanne's recovery to anyone else. After Shari the bar has quite simply been set too high!

Thank you so much Shari! 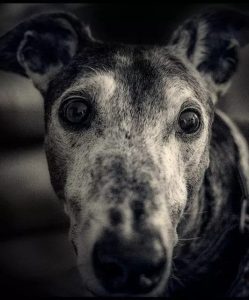 Ella Mitelberg & Farmer
My 12 year old greyhound has LS disease and arthritis, which has been worsening over the past year or so. Shari suggested that rehab may help and so far I am very happy with his progress. He has much more energy and most importantly does not seem as painful. Shari has been very informative when teaching me how to do exercises at home and my dog absolutely loves her!

Diana Pattison
We met Shari Sprague January of 2014, when our 6 1/2 year-old beagle was diagnosed with FCE, Fibrocartilaginous Embolli, a common cause of paralysis in dogs. Shari came highly recommended by our veterinarian. She explained to our what we were dealing with.Shari spent over an hour and a half just observing our beagle on the first visit; on the floor, playing and stroking and encouraging our beloved Margaux. We would receive written exercises for our dog. Shari would call to check on her progress.After 13 weeks of therapy, with Shari's encouragement, patience, support, intuitive knowledge, and genuine love, our dog now walks, runs, and plays happily with our other dogs. Shari created the rehabilitation therapy program at Coral Springs Animal Hospital, where we had initially taken our dog for a consult, and now, due to her high demand, operates her own therapy program in Sunrise.We are very fortunate to have come across such an outstanding professional; her canine patients truly receive the best cutting-edge care; we know first hand. 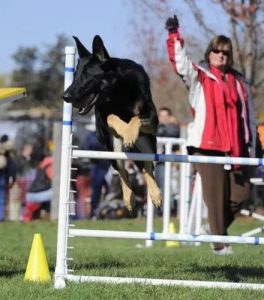 Shari and PUP Rehab and Conditioning have been a godsend to me and my German Shepherd, Fox. I compete in agility and Fox has always been a high drive, easily over-aroused dog. After some initial qualifying runs we had a long streak of knocked bars and crazed runs. He is also accident prone and is no stranger to the cone of shame. When I found Shari last year Fox was limping and had a suspected knee or toe issue that a rehab vet in my previous state was trying to determine. Shari discovered his propensity for getting rotated pelvises and also some significant weakness and lack of proprioception in his rear end. This is an athletic dog with good hips, so I had no idea there was an issue. After adding exercises specifically targeted at his weaknesses, and following her exercise and stretching program, he is getting noticeably stronger and more agile, and is much improved in the agility ring. Without her, I know I would still be contributing his knocked bars to a training issue, and would definitely be setting him up for future injuries. I highly recommend Shari for your performance dog, whether or not you are seeing any major issues with them currently. I will forever be grateful I met her. 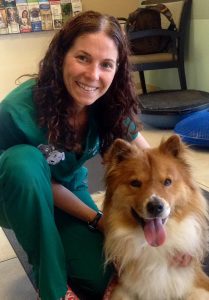 Want help deciding if rehab can help your pup? 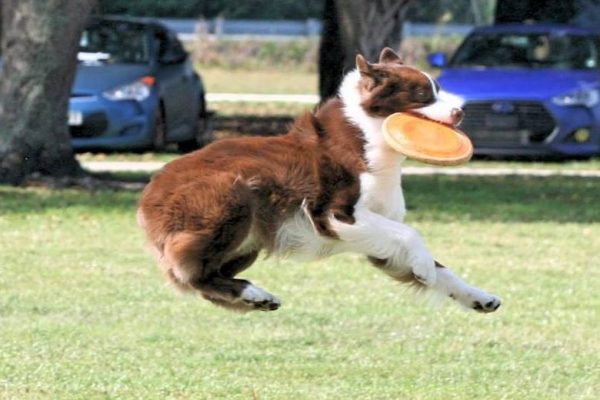 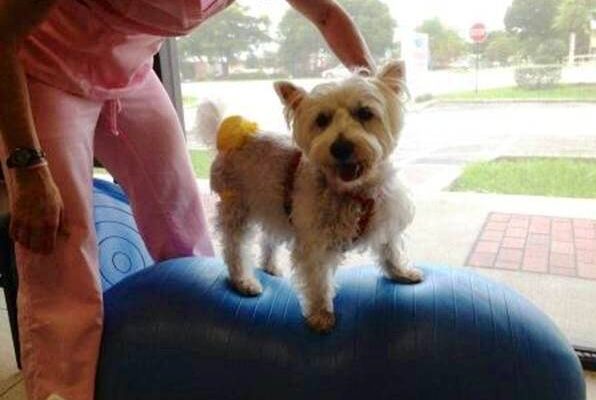